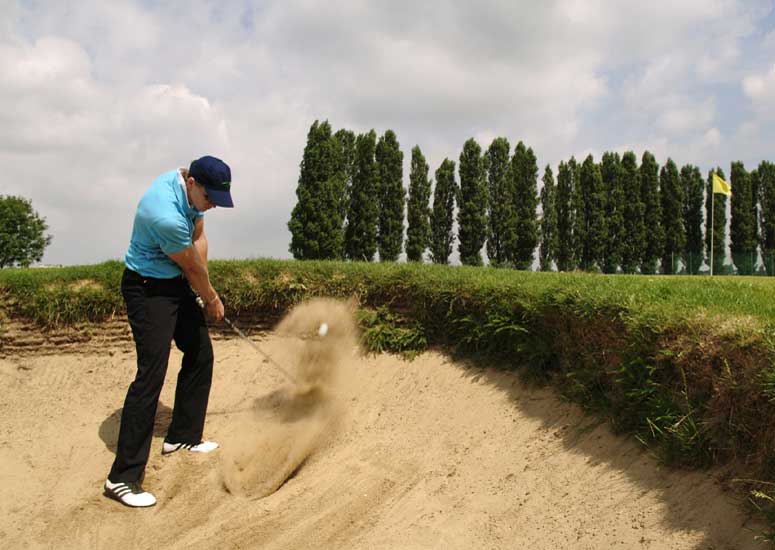 Golf club heads don’t last forever. You may be lucky enough to get twenty years of use out of a club or you may find that you’ve got to replace them after just five years. There are several reasons why golf club heads come loose, fall off, or even break.

Fat shots are a common golf problem, and they can cause the club head to break off. When you hit the ball well-struck, it gives you a solid feeling. However, if you hit it poorly, especially with a fat shot. It feels like you’re hitting nothing at all and the ball won’t travel very far.

You won’t feel much of anything when doing this kind of shot because there was no face contact with your club head or shaft during impact. A fat shot is defined as hitting the ball off either toe or heel of your club rather than on its sweet spot (the middle part where all those dimples are).

Fat shots can also cause other damage to your clubs. They can cause both heads and shafts to break off! The result is often an expensive repair bill from an equipment store or golf course pro shop if not done properly by yourself at home with some simple tools such as pliers or wrenches (which should be included with most sets).

Epoxy Inside The Shaft

The shaft and head are made of different materials. The head is made of steel and the shaft is made of graphite, which makes for a very sturdy yet light instrument. The glue holding these pieces together is epoxy, which has a low shear strength in addition to being brittle.

If your club head breaks off during impact with the ball, it’s likely that it was not glued properly or that the epoxy broke due to too much stress on one side of the club face when striking the ball.

If you’re using a 3 wood, it’s likely that the club head is made of a softer metal than the other clubs in your bag. This can make for an easier-to-break club head if it hits something hard, like a rock or tree root.

In addition to these general tips, there are some specific conditions that will make it more likely for the club head to break off.

You can’t take a club to the course and expect it to last forever. Golf clubs are not indestructible, especially when you’re playing on a golf course with trees and other obstacles. If you’re hitting trees or banging your clubs against walls, then it’s likely that your club head will eventually break off from the shaft.

The first and most obvious reason a golf club head breaks off is that the golfer swings too hard. If you swing too hard and hit your ball in the wrong spot, it will cause an impactful pressure wave that can break your club in two.

If you swing too fast or hit the ball with a lot of velocities, there’s a chance that your club head will crack upon impact with your ball and break off from its shaft before even reaching an adequate distance away from you.

Some golfers get into trouble by swinging out of their sweet spot on each swing; this causes them to lose control over their swings and can lead to some pretty bad habits like hitting under-powered shots or trying to compensate for lack of strength by swinging harder than necessary (which increases risk).

One other common mistake that many players make is taking their hands off of the grip before they finish transitioning through all three phases of their backswing — takeaway, downswing, and followthrough — causing them simply stop moving at some point during this process instead of completing it properly before starting another one altogether

Clubs Rattling Around In Bag

The best way to store your golf clubs is in a bag. Storing your clubs in a bag gives them stability and prevents them from rattling around inside the bag, which can cause damage.

Your clubs will be less likely to break off at the head if they are stable and protected when you’re storing them or transporting them to the course.

If you’re bringing multiple bags with you on the course, having one that has all of your clubs together makes it easier for you to grab everything quickly before teeing off.

Make sure you are buying from a reputable seller. Check the price of the club head, and make sure it’s within reason for that particular model.

If you have any questions about the authenticity of your new club head, ask them! A reputable seller will gladly answer all of your questions before you buy so that you can be confident in what you’re purchasing.

Check out their return policy and shipping time, which should both be clearly stated on their website or in listings they post online (if there aren’t any listed on their site). If something goes wrong with your purchase—or even if everything is perfect but something still doesn’t feel right—make sure there’s no hassle involved in getting a refund or exchange!

The lifespan of your clubs will depend on the quality of the golf club and the type of player you are. If you play frequently and have a lot of power, expect to replace your clubs every 3-5 years. If you’re more conservative with your shots and tend to use more finesse than power, you may get 5+ years out of them.

When selecting new golf clubs, it’s important not only that you choose one that matches your swing style but also that it suits the type of course where you play most often; for example: if most courses near me are lined with trees or have some elevation changes (slight hills), I would want a heavier club head so my ball would stay low rather than fly away into space (and possibly hit someone).

Additionally, if all my friends use forged irons because they feel like they’re sturdier than cast iron ones while still maintaining good distance control when hitting off-center/badly struck shots (which happens often at our level), then maybe I should consider doing so as well rather than buy titanium heads which might crack under pressure from time spent striking balls incorrectly!

Golf club heads are made from different materials, with varying durability. For example, metal irons can be quite durable while graphite ones will break more easily.

How long do metal iron heads last? It all depends on how often you play golf and the quality of the metal used to make them. If you play four times per week on some nice grassy courses then your clubs may only last 2 or 3 years before they need replacing. If you prefer driving down dirt roads then it will possibly last 1 year!

The takeaway here is that while some people might say their irons “just broke,” there are many factors at play when it comes time for replacement: how much time did those irons spend in use? What kind of hits did they take during their lifespan? And most importantly: where was it stored after use (i.e., outside on a rack vs inside).

How Long Do Iron Heads Last?

For a standard set of irons, you can expect to get at least 10 years out of your golf club heads. The type of material used will have an impact on how long they last. For example, titanium is one of the most durable materials available and is commonly used in iron sets because it lasts longer than steel or graphite.

Other factors that affect the lifespan include:

Why Is My Golf Club Head Clicking After Every Swing?

How To Fix A Broken Club Head

If you’ve got a broken golf club head, let’s hope that it’s not a driver or fairway wood. That would be bad. But even if your problem is slightly less catastrophic, replacing the broken club head is still something that needs to be done.

Here are some tips for how to fix a broken golf club head:

If you’ve found yourself with a broken club head, it’s time to replace it. However, as we said above, there are three main parts of your golf club: the head, shaft, and grip.

Before you go out and buy a new club head, check whether or not your shaft needs replacing too. If it’s bent or cracked in any way then that will need replacing before you can use the rest of your clubs again.

The same goes for grips—if they’re frayed or cracked then they’ll need replacing before using any other part of your clubs again.

Broken club heads are not a death sentence for your golf game. Although you may have to spend some money on getting a new club, there are plenty of ways to repair or even prevent your clubs from breaking. It all comes down to understanding the causes of broken clubs and taking precautions to avoid them.