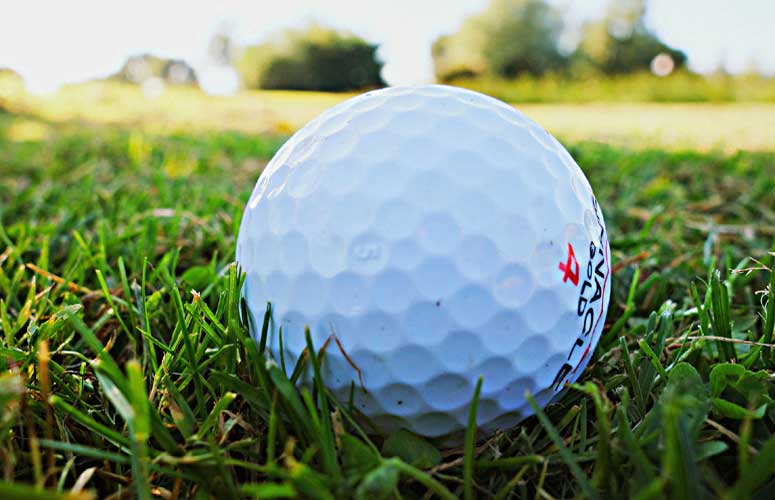 Are you a big fan of golf or a random person who come across a golf ball by accident with curiosity about the golf ball holes? Either way, I will help you find the answer although it’s a bit technical.

Why do golf balls have dimples? Dimples on a golf ball create a thin turbulent boundary layer of air that clings to the ball’s surface ensuring smooth airflow and reducing drag on the air. Plus, it creates lift force that keeps the ball in the air as long as possible.

Some important data on Dimples:

Fly Through The Air For Longer

Dimples are bumps on a golf ball, which reduce drag and allow it to travel further. They also affect lift, the force that keeps your ball in the air as long as possible.

Affect The Way Air Flows Around The Ball

The dimples help the ball travel longer because they affect the way air flows around the ball.

The dimples reduce drag by creating a turbulent boundary layer, which creates friction and makes it harder for air to escape from underneath your golf club. This helps keep your shot on track throughout its flight, allowing you to hit more consistent shots that land closer to your target.

By Reducing Pressure, Golf Balls Can Travel Further And Faster.

Dimples reduce the pressure of a golf ball, which can increase its flight distance and speed. Pressure is the force per unit area, and every surface has an area. For example, a sphere has a volume (the number of cubic inches) equal to its radius squared times pi.

If you want to know how much pressure you’re experiencing when hitting your shot or putting stroke then multiply your grip size by 2 and divide by π (pi).

Pressure is measured in pounds per square inch (psi), but it’s also useful to think about as force per unit area: because dimples reduce the amount of air inside them they don’t compress as much when struck by clubs so less pressure builds up on their surfaces compared with smooth balls without dimples.

Golf Balls Have Around Between 300 And 500 Dimples.

The dimple pattern is designed by using a computer program that calculates how many dimples should be placed in each section of the ball’s surface so it gets rid of its energy more efficiently as it travels through air (or water).

Most golf balls have between 300 and 500 dimples, with an average depth of about 0.010 inches for better control of the airflow, drug, and distance.

It Keeps Balls In The Air For Longer But Doesn’t Improve Accuracy.

Dimples are not the secret to a long drive. They do not make your ball travel farther, nor do they improve accuracy in any way.

In fact, dimples actually reduce your chances of hitting the golf ball straight by creating turbulence on the surface of the ball that increases drag and decreases spin rate.

The dimples on a golf ball are key in helping to increase its distance – but not its accuracy. Golf balls are designed with dimples because they help the ball travel further by creating lift, and this can be seen as both positive and negative.

On one hand, this means that you’ll hit your shot farther than normal; on the other hand, if you hit it too hard or lose control of your swing at all then it can bounce off course and end up far from where you intended (especially if there’s no wind).

To prevent this from happening too often I recommend using more conservative shots so that when things go wrong it won’t happen frequently enough for them to become frustrating!

It Isn’t Just Limited To Golf Balls And Can Be Found On Other Sporting Equipment.

There is other sporting equipment that has dimples. Golf balls and baseballs, for example, both have round or square holes with a dimple in them. Dimples can also be found on sports equipment such as tennis balls and ping-pong paddles.

Are More Dimples On A Golf Ball Better?

Yes, dimples are not just a cosmetic feature, they’re a key part of the golf ball’s performance. They help keep the ball from flying off course, and they also make it fly straighter than it would otherwise.

That means that dimpled golf balls will travel farther and faster than their non-dimpled counterparts!

Did Golf Balls Always Have Dimples?

The answer is no, but they did start to appear in the 1930s. In fact, there are many different ways to explain why golf balls have dimples. It’s because they help the ball travel farther and faster when hit by a club or another object.

The modern-day golf ball was designed with dimples on its surface so that it can roll more easily across uneven surfaces such as grass fields or sand traps at courses around the world (and even city streets).

What If A Golf Ball Has No Dimples?

If you’ve ever played golf, then you know that dimples are key in helping to make a golf ball fly through the air for longer. This is because they help create lift and drag, which allows the ball to remain airborne longer than it would otherwise be able to.

But what if there aren’t any dimples on your golf balls? That doesn’t mean that they won’t fly! In fact, it’s possible for some balls with no dimples at all (like those made from plastic) can still fly just as well. And maybe even further than those with dimples!

The reason why this happens is that there aren’t any holes in these lightweight balls where the air comes out when hit by a club head or another object such as an errant gust of wind blowing across them.

How Many Dimples Are On A Pro V1 Golf Ball?

The Pro V1 golf ball has a total of 488 dimples, while the Pro V1x has 500. This makes it one of the most dimpled balls on the market today.

How Many Dimples On A Golf Ball?

The number of dimples on a golf ball varies between 300 and 500. The dimples are called pores, and they’re a trade secret.

What Are The Dimples In A Golf Ball Called?

Dimples are called mounds because they’re raised. The term “dimple” comes from the Middle English word “dimple,” which means hump or hill.

Dimples on a golf ball are necessary because it helps fly faster and longer. It wasn’t until the 1930s that people realized to put dimples on balls.